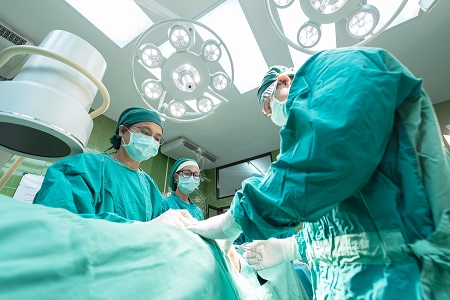 A woman who has worked in operating theatres for over 30 years has launched a petition to protect thousands of healthcare workers exposed to what she says is ‘a toxic smoke plume’ produced during surgery, and is being backed by the Association for Perioperative Practice (AfPP), the UK’s leading membership organisation for perioperative practitioners.

Kathy Nabbie, who works as a surgical first assistant and scrub theatre practitioner, says thousands of healthcare workers are routinely exposed to harmful smoke produced by electrosurgery, due to the lack of evacuation devices within theatres. Having never smoked, she suffered with chronic bronchitis, which she claims was a direct result of exposure to the toxic chemicals circulating in operating theatres, and is now unable to scrub, or even circulate, in theatres where smoke evacuation devices are not used.

She said: “In 2007, smoking bans were introduced in the UK, yet we are still ‘smoking’ within operating theatres because some healthcare professionals are reluctant to use evacuation technology. This continues to put perioperative staff, visitors, and patients at risk of breathing in many harmful compounds found in surgical smoke plume, including hydrogen cyanide.”

Surgical smoke plume is visible to the naked eye, and releases a distinctive odour. If not correctly evacuated using industry-approved local evacuation ventilation systems (LEVs), it can be inhaled by theatre staff and re-absorbed.

Over the past 12 years Kathy Nabbie says she has tried to raise awareness by contacting key political figures within the Department of Health and The Royal College of Surgeons (RCS), but has been unable to progress the matter. She has now launched a nationwide government petition to make the use of smoke evacuation devices compulsory in all theatres. Ultimately, she hopes that by sharing her story, government officials, perioperative staff, and the public, will become more aware of the mutagenic properties of surgical smoke, which she says ‘is akin to cigarette smoke’.

She added: “In 2007 I moved to work in the speciality of breast oncology, where I introduced smoke evacuation systems to the current professor of breast oncology surgery. Since then, I haven’t once developed chronic bronchitis following a common cold. Two states in America – Colorado and Rhode Island, have already passed laws to make evacuation systems mandatory, with others following closely behind. We have the technology available, so it’s about time we utilised it and followed the US. As well as protecting patients, we must also protect our colleagues, who should not have to go to work every day and breathe in toxic smoke.”

Kathy Nabbie’s petition is supported by the Association for Perioperative Practice (AfPP). Lindsay Keeley, the Association’s Patient Safety & Quality lead, said: “We are delighted to be supporting the campaign. It is important that we work together to raise awareness of the harmful effects of surgical smoke plume, and attempt to make the use of evacuation devices mandatory in all theatres.”

With additional support from the International Council of Surgical Plume and ‘numerous’ UK LEV manufacturers, the petition has already garnered over 5,000 signatures, but for the government to respond, Kathy Nabbie needs a further 5,000 before the 25 July deadline.

Anyone inside or outside the healthcare industry can show their support by signing the petition at https://petition.parliament.uk/petitions/237619.

The AfPP points out that surgical smoke contains up to 80 harmful toxic gases, viruses, bacteria, and vapours. It also releases an unpleasant odour, and can obstruct the surgeon’s view of the surgical site. Over 1.5 million healthcare workers, including surgeons, nurses, operating department practitioners, and others, are exposed to surgical smoke annually. Acute health effects include eye, nose ,and throat irritation, nausea, headache, cough, nasal congestion, asthma, and ‘asthma-like symptoms’.

Building a framework for women in construction

Taurus Fitted Bedrooms specialise in providing quality fitted bedrooms at affordable prices. From our free no obligation design service to the manufacture and installation of your new fitted bedroom, you can be assured Taurus will be with you all the way. We want our customers to be happy with our work, that is how we get most of our business...