A successful week with tomorrow’s engineers 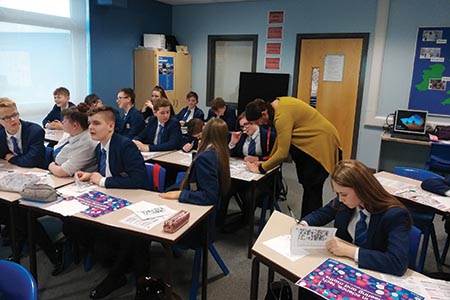 Encouraging able new entrants, and particularly young people, into healthcare engineering and estates management, and wider STEM roles, is an ongoing priority for IHEEM, and one of the key strategic goals for CEO, Pete Sellars.

In late January, IHEEM Project Support Officer, Monira Kaouech, the Institute’s STEM Ambassador, spent a week holding workshops and presentations in schools and colleges in North-East England, working with professionals already in the field, to give young people a flavour of a career in healthcare engineering and estate management, the associated construction supply chain, and wider engineering. As HEJ editor, Jonathan Baillie, discovered from her during a subsequent discussion, postevent questionnaires showed participant engagement levels of up to 97 per cent.

Monira Kaouech signed up as a STEM Ambassador early in 2019, and has since co-ordinated and staged a number of similar workshops, which she has much enjoyed being involved in. She explained, before going on to tell me more about late January’s successful ‘Collaboration, Diversity, and STEM Week’ in North-East England: “Since becoming a STEM Ambassador, I have held eight or nine workshops, including in Birmingham and the Tees Valley. I will be looking to hold more, both locally in the area around IHEEM’s Portsmouth head office, and elsewhere in the country where schools are willing to participate, over coming months.

“During the week I spent up in the Tees Valley, beginning on 28 January this year, our goal was to hold workshop-type events in schools and colleges across the five Boroughs there. I drove up to the North-East, having initially had contact from Paula McMahon, a civil engineer who is a Regional Supervising Officer at Sir Robert McAlpine, and is based in the construction company’s Darlington office. Like me, she has been involved in previous ‘People Like Me’ workshops – a collaboration between a large number of institutions under the ‘Engineering Together’ banner. Paula is also the chair of the North-East Engineering Together Society, and had been looking to reach out to other engineering institutes on the STEM front.”

Our prime objective is to provide product solutions and services that fully satisfy our customers’ requirements and expectations.
Starkstrom is a British company, founded in 1971, which initially specialised in designing and building control panel equipment. The company has its own UK manufacturing facility and supplies operating room...