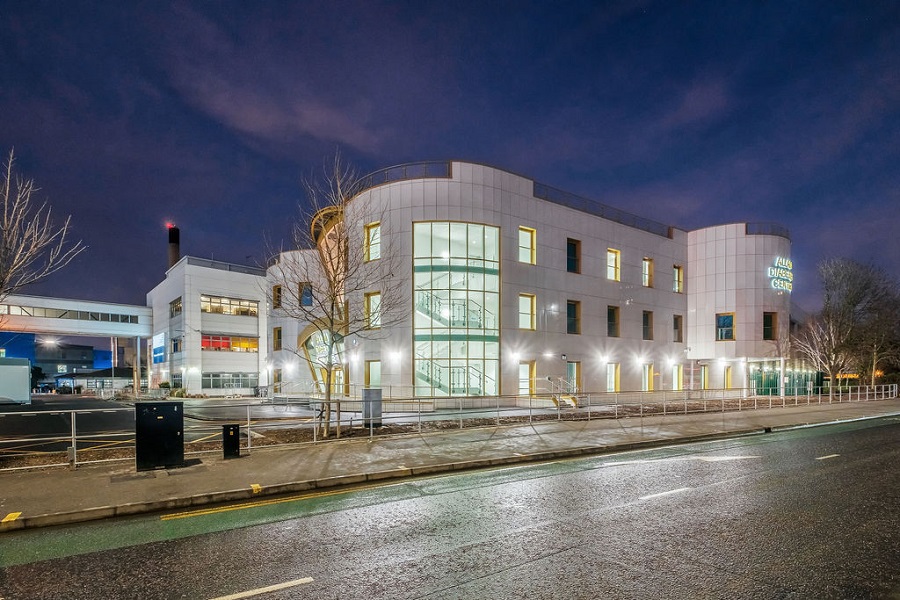 Setting the brief to create a positive architectural statement at Hull Royal Infirmary on Anlaby Road, an important gateway into the city, Ehab Allam wanted to improve the local street scene and attract high-calibre research staff and funding streams into the region. ACA says the circular building’s organic plan was inspired by the anatomy of the major organs affected by diabetes, reflected in  its curved lines, with its skin of porcelain cladding ‘a symbol of protection for such organs’.

ACA founder and MD, Alex Caruso, said: “The competition for The Allam Diabetes Centre in Hull was initially won by a global architecture practice. However, its design didn’t satisfy Dr Allam’s aspirations. Due to a long-term working relationship, Hull University Teaching Hospitals NHS Trust admire my practice’s creative design responses, and our enthusiasm during previous completed projects, so invited ACA to present an alternative design to Dr Allam. As a small, local family practice with a more personable, less commercial approach, we demonstrated that ACA could not only be more adaptable and flexible in delivering this flagship project, but could also design a building that would exceed his expectations”.

Dr Allam admired Alex’s passion as architect, while his design reflected the initial brief for ‘landmark twin buildings’ to be constructed at the main entrances of two East Yorkshire hospitals – one for the Diabetes Centre in Hull, and another for the Endoscopy Clinic in Cottingham.

The ground floor of the Allam Diabetes Centre incorporates a large waiting area and reception, office space, consulting rooms, and specialist treatment rooms with associated ancillary facilities, the first floor individual and open plan offices and training rooms, and the second, research consulting rooms, offices, store areas, and a roof void. There is also a roof garden with a planted area.

“It’s unusual for buildings to have curves, as building in straight lines is far easier. However, taking the general geometry of the organs, ACA’s curved design creates a salutogenic effect, with an entrance designed to embrace and welcome people in.”  During the design process ACA aimed to complement the hospital surroundings, taking inspiration from a local listed building. For the finish, the firm drew inspiration from Dr Allam’s Egyptian heritage to include a marble skin as a metaphoric protection for the organs affected by diabetes and golden-coloured window frames.”  Alex Caruso added: “The porcelain cladding is a biodegradable material, with golden reveals and glazed atriums. The stylised concept gives elegant results, and while the building had to wow and be impressive, the Trust had a budget, so aluminium was converted into powder-coated windows.”

Ehab Allam said: “I am very pleased with Alex Caruso’s and the ACA design team’s response to the brief – to design the Allam Diabetes Centre as a recognisable and memorable landmark at the front of HRI.  My family and I are proud to be associated with such an iconic building, whose beautiful and inspired design has both lifted and transformed the local street scene to an unprecedented level for the area.”

Of the ‘twin building’ under construction at the entrance to Castle Hill Hospital in Cottingham – to be home to The Allam Endoscopy Clinic – Ehab Allam said: “ACA’s design of the Allam Diabetes Centre also fulfilled our aspirations for a twin building, the Allam Endoscopy Centre. Both buildings represent an important symbol of my family’s contribution to the city of Hull.”

Polyflor Ltd is the UK’s market leading manufacturer of commercial vinyl floorcoverings and prides itself in being a leading expert in healthcare flooring solutions.
The floor has a vital role to play in creating a relaxed environment that is safe, clean and welcoming for patients, staff and visitors. Our product portfolio provides...