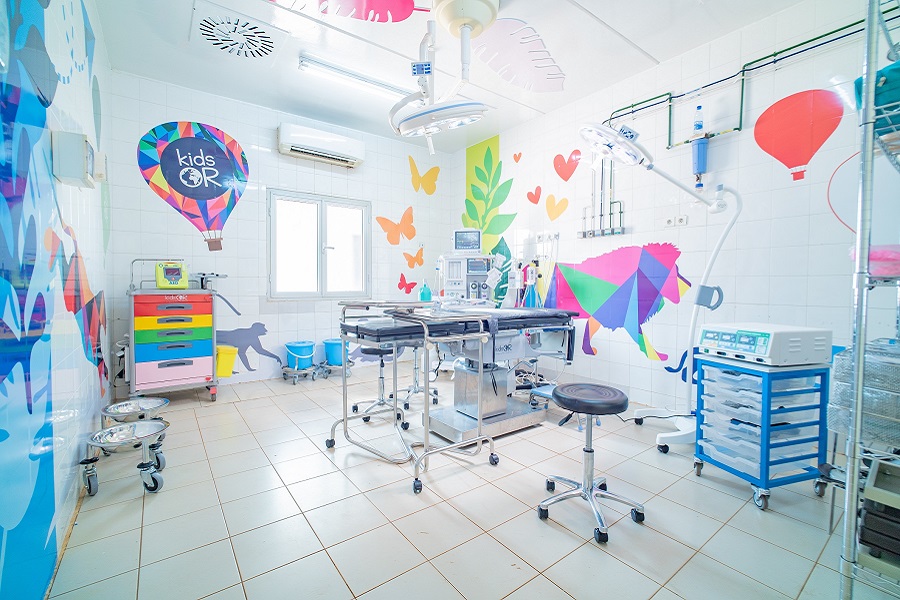 A dedicated team in a ‘hidden hub’ in central Scotland hub is on track to build and ship 30 fully-equipped operating rooms in 2021 alone, all destined for hospitals throughout Africa.

Charity Kids Operating Room (KidsOR) is reportedly the only  global organisation focused on providing dedicated operating rooms for children’s surgery – with its work having already helped save and improve the lives of tens of thousands of children. Founded by Scottish philanthropist, Garreth Wood, and his wife, former model and television presenter, Nicola, in 2018, its goal is to install 120 paediatric operating rooms across Africa by 2030.

Despite the past year’s challenges, the seven-strong team at KidsOR’s Dundee depot have ramped up the curation of the rooms, which are individually designed by biomedical engineers, working with in-country colleagues, to ensure that each aspect will meet the long-term needs of local surgeons.

Recent months have seen containers delivered to Tanzania, Ivory Coast, Democratic Republic of Congo, Senegal, Zambia, and Nigeria – with a further five containers to be shipped in May and June alone. KidsOR is focusing its efforts on reaching countries with no – or critically low – provision for children’s surgery, where deaths from treatable conditions – such as appendicitis or complications following broken bones – are extremely common.

Dave Tipping, director of Global Operations, who heads up the Dundee warehouse and lab, is a qualified architect, and has been with the charity since it was founded, spearheading its design and delivery of operating rooms. He said: “The team here is phenomenally committed. We have a singular focus on providing extensively researched and tested rooms that will provide maximum benefit to the recipient hospital, its surgical teams, and thousands of often desperate families. We’ve had to adapt considerably over the past 15 months, with it being much harder, or even impossible, to get out to the locations where the projects are being delivered.  Everything we do is around providing a sustainable solution. We’re here to ensure that surgeons in the African continent, as well as those in countries we’ve worked in previously in South America, are able to utilise each life-saving and life-changing item for the long-term.”

Also part of the Kids OR’s Dundee team is biomedical engineer, Francesca Aras, who would typically be ‘jetting around’ low and middle-income countries to determine hospitals’ needs and suitability to receive a room, before working on solutions from the Scottish hub. During the pandemic, she, Dave Tipping, and the team, have ‘found creative solutions’ – making use of the full-scale ‘mock’ operating room within the Dundee warehouse, where staff can test each item of equipment, and provide video-link demonstrations. A typical operating room dispatched by KidsOR will feature over 3000 items, with each requiring quality certification and instruction, as well as commodity codes, which can be different for each country.

KidsOR, which also has offices in Edinburgh and Nairobi, has a network of engineers and surgeons throughout Africa installing and testing equipment – and providing long-term support to ensure the rooms operate at their optimum once installed.

The charity also takes pride in ensuring that its signature colourful animals, designed by Sarah???, and printed onto vinyl, adorn the walls of each of  the operating rooms it installs – helping children feel calm and reassured as they go into surgery.  The designs take inspiration from the animals and the landscape of the country the team is working in. Sarah said: “It might be rainforests, jungle, savanna, or a desert. We produce geometric patterns which pop with colour and really stand out. The animal illustrations are made using Adobe software. We then test them out in 3D models of the operating room to give us a better idea of how the artwork will look in real life.”

Nicola Wood says that although 2020 and 2021 have proven ‘challenging’, the team has demonstrated ‘unwavering enthusiasm’. She said: “Recent months have had a galvanising effect on our team. We’ve now given more than 36,000 children access to life-changing or life-saving care. Globally, more children die from conditions easily treated through surgery, than from HIV, malaria, and TB combined. We’re helping change that by providing the equipment and training for paediatric surgery. Yet there is still so much to do – and we won’t stop until we achieve our mission – a world where every child has equal access to safe surgery. Each container leaving our Dundee hub is a step closer.”

The photo shows a paediatric operating theatre at Charles de Gaulle Hospital in Burkina Faso, post-fitting out by KidsOR.

MMC-built ward at Forth Valley will enable an extra 1,500 operations annually

Altro have been at the forefront of innovation for over 100 years. Today, working closely with architects, end customers, engineers, designers and contractors around the world, our insight and expertise help them transform everyday spaces into environments that can improve the wellbeing of everyone that uses them.
And by consistently...