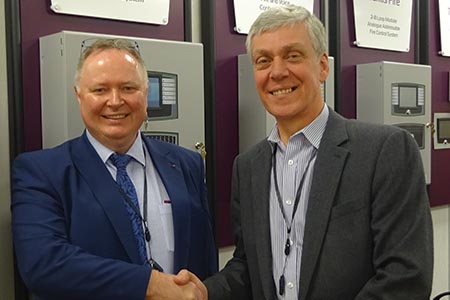 Pictured left, he succeeds Kevin Restell (right), who is retiring after over 25 years with the business and its parent company, Hochiki. Kentec said: “Kevin Swann is an established name in the fire and security industry, with some 28 years’ experience. He was closely involved in the protocol standard evolution at Apollo, and has held a number of senior positions within UTC Fire and Security as MD (Global), and regional manager for UK and Ireland. He joins at an exciting time for Kentec, which has seen turnover increase by 54 per cent under his predecessor’s leadership, and doubled its manufacturing capacity.”

Kevin Swann added: “We thus have the perfect platform to make Kentec the world-leader in open-protocol and multi-protocol fire detection panels, and the first choice for fire extinguishing panels, with our robust, industry-leading Sigma XT and Syncro XT technologies.”

The appointment coincides with Hochiki’s 100th anniversary, and Kentec’s investment in the ‘new generation’ Taktis fire panel. “Taktis is the only openprotocol and multi-protocol panel, and is building significant momentum in the marketplace globally,” added Kevin Swann.

MTX Healthcare is a division of MTX Contracts Ltd. Specialists in the design, construction and engineering of bespoke and fast-track healthcare projects we have a strong commitment to quality and service. We aim at all times to provide a long lasting, efficient and cost effective solution to our customers consistently promoting innovation and...

Statutory Regulations
We work to support, inform, and assist you in implementing and maintaining your Safe Systems of Work. Following this we work to monitor, and audit effectiveness of the Safe Systems of Work across those high-risk activities within your organisation.
View details »
Healthcare Environments
We are ideally set...