The Royal Free London NHS Foundation Trust has – as it puts it – ‘smashed targets’, saving £242,681 in 19 months, and triumphing in the Reuse category of the NHS Sustainability Awards, with the help of the Warp It system that helps staff to reuse and recycle. Unwanted items have been donated to other Trust departments, and assets worth almost £5,000 claimed from other organisations on the network. These include ‘high-end’ sofas ‘smart enough to include in a new-build project’.

Dave Reavy, the Trust’s head of Security and Support Services, explained that the Warp It online reuse system ‘helps to focus resources where they are needed’. He said: “This is an excellent way of saving the NHS money, reducing wastage, and using available funds for the important stuff, such as patient care.”

As well as saving money, the system has diverted over 50 tonnes of waste from landfill, and led to a reduction of over 100 tonnes of CO2. In the Trust’s Procurement Department, a drop in the need for purchase orders is freeing up staff to provide support elsewhere, while porters have also gained more time – and fewer injuries – now that they do not have to dismantle furniture for recycling.

The initiative came into force when Support Services manager, Sumal Karunaratne, became concerned about the scale of waste that saw surplus assets disposed of in skips. He assembled a cross-departmental ‘action team’, and engaged senior management to drive the case for reuse. The resulting Warp It system is available from the home screen of computers, and takes just minutes to register. Items such as furniture and stationery are placed onto the online platform, which then makes them available for others to use. Warp It explained: “The network reaches beyond the individual Trust, council, or business to other organisations in the area, which increases the chance of take-up for items no longer needed.

“As many Trusts face a cultural barrier to process changes, recruiting the right stakeholders was crucial to success. Influencers were also key in spreading the message. Procurement staff directed staff requesting new items to the platform, and reuse was incentivised – transport for reuse was free, while staff seeking to dispose of reusable assets were charged a fee. Communications also played a strong role, with the production of an informative video.”

Sumal Karunaratne added: “Without this system, we could not have scaled this across the organisation. Warp it has already rolled the system out across 20 per cent of the NHS, and their help and guidance throughout the process was instrumental.

“This project has demonstrated to many that recycling and reusing is possible, and we are now refurbishing chairs and exploring other items for refurbishment. We are also currently exploring the business case for external or internal repair. Everyone’s eyes are now open to circular economy solutions.”

Halton Group is the global technology leader in indoor air solutions for demanding spaces
We are passionate about indoor environments. We offer products, services and solutions that combine excellent indoor environment, safety and energy efficiency to customers who value people’s wellbeing.
We believe that everyone has the right to...

Track your inventory and get your MGPS under full control 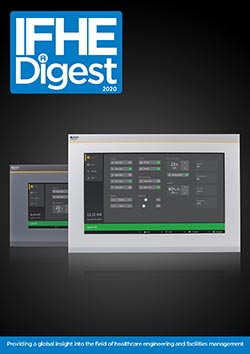