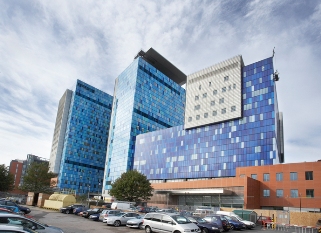 Europe’s newest hospital, and the UK’s largest ever PPP-funded and operated healthcare facility – the £650 million Royal London in Whitechapel, has opened its doors– the successful culmination of years of hard work and planning which has seen doctors and nurses involved in the design process throughout, working under the guidance of a Trust New Hospitals Development Team to create the optimal healing environment.

The move of 110 wards and departments from what the Barts and the London NHS Trust concedes were ‘outdated, ill-configured facilities’, some dating back to the 18th century, into new, ‘state-of-the-art  premises, began last December. A meticulously planned 12-week re-location programme saw over 3,000 staff and patients successfully moved from old to new buildings.

The Trust says the new facilities – housed in a striking new complex comprising three strikingly glass-clad 17-, 16-, and 10-storey towers – will allow patients to be treated in facilities that ‘match the exceptional care for which the hospital has become renowned’. The Royal London has a particular reputation for its expertise in clinical areas such as trauma and emergency care; paediatrics and neonatal care, renal, and maternity.

The Trust’s Chief Executive, Peter Morris, said: “The move into our new hospital, which for the first time brings our clinical teams together under one roof, gives us a once-in-a-generation opportunity to provide a health legacy to a community with some of the most challenging health needs anywhere in the developed world.”

Occupying an area equivalent to 40 football pitches, the new hospital is said to be one of Europe’s best-equipped and most comfortable. The scale of diagnostic care has been doubled, thanks to more equipment and facilities, while over 40% of the ward accommodation will be single rooms with en suite facilities, with the remainder in roomy four-bedded bays, also with en suite bathrooms. Patient accommodation is on the outside of the building to maximise light and views over the City and Canary Wharf.

Wards have separate treatment rooms for minor procedures, and there are increased isolation facilities, including negative and positive pressure rooms to prevent infection spread, while the 26 new ‘state-of-the-art’ theatres are a third larger.

The multi-disciplinary team behind the new Royal London’s planning and design sought to create an environment that would increase patient access and speed up treatment, for example via greater co-operation between departments, with many teams and services now co-located for the first time. One excellent example is the children’s hospital, the wards and facilities of which were formerly spread over eight separate areas in several different buildings, but which are now all together in the new hospital on the sixth, seventh, and, eighth floors.

The construction of the new Royal London is part of a £1bn PFI project to transform healthcare facilities at both the Barts and the Royal London sites. An earlier phase saw  the completion, at the St Bartholomew’s site in 2010, of one of Europe’s most advanced new cancer centres, while 2014 will see the completion and opening there of a new Cardiac Centre of Excellence.

Barts is one of the UK’s oldest hospital sites, with parts dating back to the 12th century, and, as part of the project, is also seeing a number of buildings sensitively refurbished, with a specific focus on returning the large central square to its original 18th century glory.

Main contractor for the entire redevelopment project is Skanska, while hard FM over the 42-year concession period will be delivered by SFS, and soft FM services by Carillion.

Sponsored: Dräger Event on ‘next level’ of healing design

Work on HDU and acute ward begins at Airedale General

“Kohler Uninterruptible Power (KUP) has established an enviable reputation across hospitals and healthcare estates based upon the introduction of innovative power protection products, a consultative approach and exceptional levels of pre-sales and post-delivery service.
Backed by the worldwide resources of the almost 100-year-old Kohler...

We are a global manufacturer with over 50 years’ experience of supplying quality specialist building products to the healthcare sector. Our solutions assist in increasing the lifecycle of the building fabric and reducing cleaning & maintenance costs, whilst meeting aesthetic and functional requirements of healthcare environments.
Our...